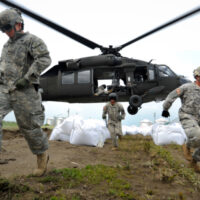 During President Donald Trump’s presidency, National Guard troops have been employed for various purposes, such as increased security on the U.S.-Mexico border or helping with natural disasters, such as wildfires and tornadoes. These troops provide a great deal of assistance in times of need when extra agents cannot be hired quickly. Unfortunately, though, performing these duties may not qualify National Guardsmen for veterans benefits, even though these duties are part of their job.

There are strict requirements for veterans benefits. To receive health care, GI Bill education benefits and other benefits, National Guard members must be on active duty for 180 consecutive days. Typically, orders from the federal government would qualify for active duty.

No matter what orders a National Guardsman is given, they should receive the same pay and benefits. However, that has not been the case. It depends on the mission and who gives the orders, and Congress has not made many changes to this since the September 11 attacks, even though there are now more demands and expectations.

National Guard members have seen some changes to the law. In 2016, Congress made it so that anyone who retires from the National Guard or reserves after 20 years receives honorary veteran status, no matter how much time they spent in active service. However, they were not given federal benefits, as Congress has concerns about expenses. Providing full veterans benefits to more servicemembers comes at a huge cost.

However, many members are unaware that they are not receiving benefits. Many National Guard troops have responded to natural disasters like Hurricane Katrina and Hurricane Maria. When they return and apply for benefits under the GI bill, they are shocked when they find out they have been denied. Because they are deployed, they assume they have the same benefits, but that is not always true.

This has negative consequences for National Guardsmen and the military as a whole. Members are more likely to leave the National Guard. Those who stay are unable to get the health care they need, particularly mental health benefits. This has led to many fatalities. In 2017, there were 919 National Guard and reserve members who committed suicide because they were barred from access to the care they needed.

All servicemembers should receive benefits for their contributions to society as well as personal sacrifices. To not have the benefits they deserve can impact a National Guardsman’s healthcare and educational opportunities.

White Plains veterans disability benefits lawyer Michael Lawrence Varon fight for your rights. He can handle even the most complex claims. Even if your claim has been denied, he can help you obtain a desirable outcome. Call 914-294-2145 and schedule a consultation today.