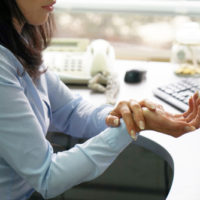 A number of people find it easy to take advantage of government programs, such as workers’ compensation. Some people who are injured on the job like to double dip—they’ll work another job or start their own business while continuing to collect workers’ compensation benefits. They often go to great lengths to hide this side gig from others so they don’t get caught. But many are still caught anyway thanks to investigators who employ surveillance techniques and other methods to catch fraud.

On March 20, a Buffalo woman pled guilty to workers’ compensation fraud after she was caught collecting thousands of dollars in insurance benefits while profiting from an eBay business at the same time. The 47-year-old woman was arrested and charged with two felonies: perjury and grand larceny. She pled guilty in Erie County Court to fourth degree attempted grand larceny. She also signed an order of judgment for the amount she stole, which totaled $48,023.77.

The woman began receiving workers’ compensation benefits in January 2012. She suffered a workplace injury at the nursing home Absolut Care of Aurora Park. She has been receiving benefits since then, at a rate of $319 a week.

An investigation showed that the woman had started a business on eBay in January 2011—a year before she was injured. She continued to run this business while she was injured and receiving workers’ compensation benefits. She ran the business until 2015, and by that time, had made $53,000 from it.

The woman attended a workers’ compensation hearing in November 2015.  When questioned, she claimed that she did not sell items she made for friends or family. She has since been released from police custody and awaits sentencing. Her next court date is scheduled for May 29.

Workers’ compensation agencies are becoming more savvy when it comes to spotting possible employee fraud. They may conduct interviews and background checks to determine if fraud is a possibility. They may also use audio and video surveillance to see if you really are injured. Some investigators even use social media. There are some common signs of fraud, which include:

Those who defraud the workers’ compensation system make things more difficult for those who are truly injured and unable to work. This leads to strict procedures that cause delays in the process.

If you have been injured in the workplace but are having trouble getting the benefits you deserve, it may be time to seek legal help. Seek help from the Law Office of Michael Lawrence Varon in White Plains. He can help you obtain the workers’ compensation benefits you deserve. Call his office at 914-294-2145 to schedule a consultation.