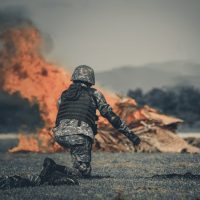 Veterans have the legal right to receive benefits for injuries and health conditions caused by their time in service. While those with amputations and other visible injuries may be quick to get veterans benefits, those with invisible injuries—such as asthma and lung problems—are often overlooked.

Victims of burn pit smoke are finally getting the attention they deserve. In 2021, advocates fought hard to improve these victims’ benefits and they made great strides. But they’re not done yet and they’re hoping to achieve even more this year.

Toxic exposure injuries such as inhalation of smoke from burn pits are getting more attention on the legislative side of things. Last year, numerous bills were created to extend research and benefits eligibility. While these bills advanced pretty far in Congress, they unfortunately stalled by the end of 2021.

However, the House and Senate are still pushing those measures along. In response, the Department of Veterans Affairs (VA) is working on the issue, after victims and groups have spent many years advocating for presumptive conditions. For the first time, it has even granted presumptive benefits to some burn pit victims. This is a huge step for veterans who were exposed to the burn pits and are now suffering from chronic respiratory conditions as a result.

Open-air burn pits have been used by the military for nearly three decades to burn items such as garbage, paper, plastics, and medical waste. Veterans have claimed that exposure to these burn pits has led to cancer and lung diseases. However, the VA has claimed for many years that there was not enough evidence to support these claims.

The VA has since changed its mind thanks to all the bills that are being pushed through and claiming the opposite. The VA is now agreeing to presume certain medical conditions are in fact linked to exposure to burn pits. As a result, medical conditions such as asthma, sinusitis, and rhinitis are now presumed to be connected to veterans based on when and where they served.

The current rule is that veterans may have a presumptive connection if they served on or after August 2, 1990 in the following countries:

Those who served in the following countries on or after September 19, 2001, will also have presumptive connections:

There is just one exception: The health condition must have manifested within 10 years of the veteran’s exposure to the toxic fumes while serving in the military.

While a lot of progress has been made in terms of benefits for smoke inhalation injuries, there’s still a lot to do to ensure veterans get the compensation they deserve.

Get your veterans benefits quickly with help from White Plains veterans benefits lawyer Michael Lawrence Varon. We have more than 20 years of experience handling complex cases throughout New York. Get  a free initial consultation by filling out the online form or calling our office at 914-294-2145.