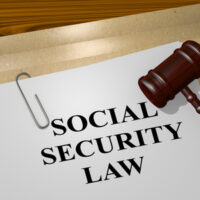 A lot of fraud goes on in the government. The government offers Social Security disability benefits, unemployment benefits, welfare benefits and much more. Many people try to take advantage of these benefits by engaging in fraud. Fraud is illegal and can result in prison time, among other penalties.

An Arkansas woman was arrested for fraud after she helped an inmate continue to receive Social Security disability benefits while behind bars. On October 13, the woman pled guilty to conspiracy to commit theft of government benefits.

The inmate was not entitled to Social Security disability benefits as an incarcerated man. However, the woman filled out paperwork and signed the man’s name so he could continue receiving payments. The scheme began in January 2017 and continued through March 2018.

The man and woman worked together to make it so the Social Security Administration was unaware that the man was behind bars in the Arkansas Department of Corrections, which would have made him ineligible to continue to receive disability benefit payments. The man continued to receive his payments. The woman used the money to pay her bills. She also deposited some of the money into the man’s prison commissary account.

There were recordings of the two discussing the scheme in jailhouse conversations. The woman admitted that she knew that the man’s incarceration would end his disability payments. Nevertheless, she filled out forms and returned them to Social Security office in Texarkana so that the man could continue to receive his payments.

Altogether, the woman defrauded the Social Security Administration out of $11,025. She faces up to five years in federal prison as well as a $250,000 fine. She is currently free after paying a $5,000 bond.

There are several ways in which Social Security fraud can occur. They include the following:

Social Security and other government benefits are highly susceptible to fraud. People always want to get free money, but this is considered theft and fraud and it can lead to harsh penalties.

High levels of fraud can make it difficult for those who truly have disabilities to get the benefits they deserve. White Plains Social Security disability lawyer Michael Lawrence Varon can help you with your claim. Schedule a free consultation today. Fill out the online form or call 914-294-2145.